I have no idea if these star fish got washed up into this pool on there own, or if it was due to human intervention. What I can tell you is that it was on the same day we saw the 12 finger star fish and that there were several groupings along the stretch of beach in this pool as many as 9 in one group we saw. 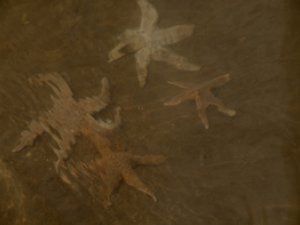 Unfortunately my camera ran out of batteries so couldn’t take any pictures of the others :-( There were a lot of star fish groups along the mile stretch of water so either someone had been very busy or there was another reason.

All the star fish were alive so it wasn’t like the incident along the south coast of England where hundreds of dead star fish got washed up on the beach.